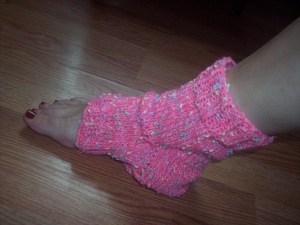 So the strawberry jam didn’t happen as planned last week. We’ve had rain, and when it wasn’t raining, I was volunteering somewhere or going to a school function or a homeowner’s association meeting. Though I do not earn a paycheck these days, I find my life full of good and useful work. I reshelve books at the elementary school and public libraries here in town. I serve on the Community Garden Committee in my homeowner’s association. I cook the meals, wash the dishes, clean the laundry, drive the child to bus and appointments, organize social events for the family, keep up with a couple online/offline mother’s groups, and attend and work at Parent/Teacher Club events. This year I even donated a knit handbag to the Historical Society penny auction. I’ve been a Girl Scout leader, a class mother, and a chaperone on many a field trip, but, alas, my income tax return showed a big fat zero next to my name in the earnings column. As far as the U.S. governement is concerned, my work doesn’t count.

Since I’m past my thirties, I don’t much care anymore what people (or IRS accountants) think about my earnings-challenged lifestyle. Much. It’s only when someone asks me at a party or upon introduction “So, what do you do?” that I feel a little bit inadequate–if not as a human being, then as a party guest. It’s something to do with the way the conversation comes to an abrupt and embarrassing dead-end when I tell them I’m a stay-at-home mom and library volunteer. I suspect this is a lower and middle-class problem. If I were planning $500 a seat fundraisers instead of pricing used items at the school tag sale, I’d probably generate a little more interest. If I were an heiress–or the wife of a gadzillionaire–I’d doubtless be much more interesting even if I never opened my mouth all night long. Money, as we all know, talks.

In any case, not having inherited a fortune or married Bill Gates, I’ve learned to quickly turn the conversation back toward the person next to me by saying in my sweetest voice, “Anyway, enough about me. What do YOU do?” The relief is evident. The party goes on.

When it comes to volunteering, I’m heartened by Sharon Astyk’s 2009 book, DEPLETION AND ABUNDANCE.

In her book, Astyk spends a chapter talking about the “informal economy” and how more and more Americans may find themselves moving into a lifestyle more like, well, mine. Where I am practicing voluntary depletion, however, many others could be forced into an economically-challenged situation by the global realities of a Peak Oil world. Astyk, concerned about the large “footprint” of the average American, decided to cut her use of energy by something like 90%–and she challenged others to do the same. Her blog Casaubon’s Book follows her continuing adventures in voluntary simplicity.

If Sharon Astyk, with her PhD in literature, can be content staying home, raising children and livestock while continuing to work on her writing projects (which includes her respected blog and published books), then so can I–minus the livestock.

Instead of raising chickens or goats, I knit, since that is unlikely to disturb the neighbors or get me in trouble with the homeowner’s association. This week I tried my hand at sock-making . . . pedicure socks in particular. These socks are useful when you want to wear a pair of flip-flops or thong-style sandals and show off your pretty pedicure. In the spring or fall, you could wear these to the spa and put them on right before the polish is applied, saving your feet from the chill and your polish from getting smeared. (I don’t know what you do about polish-smearing in the winter.) I’ve had exactly one professional pedicure in my life, but something about these socks appealed to me. I used up a lone skein of yarn that had been sitting in my knitting basket for a couple of years and spent a few challenging hours learning how to turn heels.

One sock came out floppier than the other. I ran out of yarn on the second sock and had to bind it off with a scrap of different yarn. However, I learned a new pattern and have started a second pair–in cotton this time–using another skein of yarn leftover from an earlier project. If you’d like to try these yourself, the pattern can be found on Knitty.com. These cute pedicure socks will make fun gifts for the nieces and friends in the coming year, so I intend to make a slew of them out of my leftover yarn–saving money and reducing my cabon footprint at the same time.

When it suits its purpose, even the U.S. government has been known to advocate voluntary simplicity. During WWII, when raw materials and food were needed for the war effort, propaganda campaigns created posters and slogans advocating reduction in consumption.

(I found this poster image at Texas Star Books. The poster sells for $195. Enough said.

Back then, our government told us it was patriotic to use and buy less. What a difference from today when our government tells us that the patriotic thing to do is spend, spend, spend. Ironic, eh? This seeming paradox of spending ourselves out of economic disaster makes sense only when you consider that capitalism is based on growth. When you invest your money, you expect to get that money back plus interest, right? Let’s say you invest in a company that makes . . . socks. The company has to sell enough socks to to pay your money back to you, plus the interest, plus cover all the costs of doing business–payroll, raw materials, energy inputs, insurance, etc. If you want to get your money back with interest, then, you have to hope that everyone goes out and buys scads of socks this quarter.

This is, of course, a simplification of a very complex system, but the root of capitalism is growth. We’ve been encouraged to spend, not save. We’ve been bullied into playing the stock market, working more hours than we should, buying more than we need, using more natural resources than is wise, buying oversized cars and mega-sized houses, changing fashion styles every season–all so the economy would grow. Now, I won’t go into who REALLY wins in this particular game, but it isn’t you and me. We were promised a nice, fat retirement if we put our money into 401K’s and IRA’s rather than paying off our credit cards at the end of the month. Now the house of cards has fallen, the housing market scam has collapsed, our investments have taken a dive, and guess what? If we haven’t reached peak oil production yet, we soon will, and then the fun will really start. Our economy runs on oil–cheap oil–and when the yields start to go down and the prices start to go up, growth will slow even further.

At least, this is what the Peak Oil activists and experts tell us. They could be wrong. I encourage you to research for yourself.

You would think I’d be depressed, believing as I do that our hyper-driven, mega-pixel, high-definition, overabundant life is in jeapardy. I do have my moments, of course, but I also see some good things ahead in a lower-carbon world. More time spent with family and friends. Less concern over being “in-style.” More nutritious, locally-grown food. Vibrant, local communities. Craftmanship instead of crappy goods produced in an overseas sweatshop. Live entertainment rather than electronically-delivered entertainment.

I, for one, would be just as happy to write on a piece of paper instead of a laptop.

The point I’m trying to make is that voluntary reduction in energy and other resources is preferable to an involuntary crash of our entire system. This is Sharon Astyk’s point, as well. Though some of us may be more naturally geared toward a use-it-up, wear-it-out lifestyle (my mother despairs of my ever having matching furniture), we can all find some small ways to make do with what we have rather than going out to the mall for something new. Instead of paying the ridiculous costs of a movie-theater ticket, play charades with your family . . . or if you’re really ambitious, organize a community theater production. Instead of buying a new pair of sandals, make do with the five or six pairs taking up room in your closet. Sew a new set of buttons on your shirt instead of throwing it away. Take a stay-cation instead of a vacation. Visit your local consignment shop. Consider bartering rather than buying. Visit the library rather than Borders. Learn to brew homemade beer (this would be a fun activity for spouses to work on together). Pick up a couple of needles, unravel an old sweater, and ask a friend to teach you how to knit. Go for a walk after dinner instead of plunking down in front of the advertisement delivery system . . . errr, television.

Take a first step toward energy and economic independence.

Do you have some good tips on how to reduce, re-use, or recycle? Drop me a line . . . Outside the Box.