Where the Wild Things Are

Seven years ago, my house did not exist and the lot on which it now sits was covered in forest–mostly a bunch of tall, scraggly pines with an understory of small hardwood trees and saplings, ferns, and ground-cover plants. A developer cleared a small portion of the lot and built the house. Weeks later, we moved in and began the process of creating order from the wilderness, albeit on a really small scale. 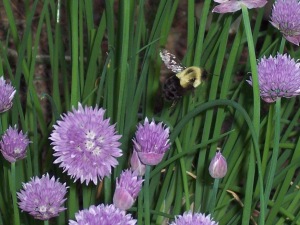 The front lawn covers the septic field. A strip of lawn in back of the house is maybe twenty feet wide. Outside the lawn is forest. In between lawn and forest, we have something interesting ecologically and aesthetically. We have edge. And edge is where the wild things are.

An ecological edge is where two environments intersect, creating an area that is more diverse than either of those environments. (Hemenway, Toby. GAIA’S GARDEN: A GUIDE TO HOMESCALE PERMACULTURE, pg. 7) In my case, the edge is the area between forest and lawn. Lawn is basically an artificially created prairie, and when rigorously maintained is also a monoculture. My lawn is not quite a monoculture–it is now mostly clover and dandelions and other opportunistic weeds that thrive in soils that are not rich enough to support wide swaths of perfect, lush, green grass. In other words, Mother Nature is trying to heal the wound that is my lawn.

Hemenway writes,“When humans make a clearing, nature leaps in, working furiously to rebuild an intact humus and fungal layer, harvest energy, and reconstruct all the cycles and connections that have been severed. A thicket of fast-growing pioneer plants, packing a lot of biomass into a small space, is a very effective way to do this.”

Basically, a forest environment is self-regulating and self-stabilizing. Nutrients are taken, used, and released by one species to be taken, used, and released by another species. Sunlight is filtered through the upper story trees which capture the energy. Smaller understory plants grow in the humus created by falling leaves and branches of the upper story. Beetles, fungi, etc. break down the fallen leaves to create the humus. Of course, I’m oversimplifying the process, but the point is, things in a forest environment are fairly stable even as changes take place incrementally. Eventually, the pine trees give way to hardwoods, for instance. But when we come in with chainsaws and bulldozers, things change too fast. Suddenly, sunlight reaches newly bared ground, and the edge explodes in a biological frenzy. Weeds, shrubs, vines and other quick-growing plants take advantage of the sudden bounty of sunlight. Nature goes wild!

I noticed this effect most dramatically in two places on my lot. Some of the old pine trees in back of the house were dying off. It seems pretty obvious to me that this land was once cleared pasture. Farmers don’t build rock walls through forest, after all. These pines must have been the first seedlings to spring up, crowding each other and crowding out the brambles and weeds. Now they are towering columns bristling with broken-off lower branches and creating a thick canopy of upper branches that manage to get some sunlight way up there. Their life-cycle nearing completion, they begin dying and falling, allowing the hardwood saplings to gather the resulting sunlight and to grow. Left alone, eventually this would be a hardwood forest of maples and oaks and beeches.

In the meantime, we don’t want old pine trees to fall on our heads, so we cull the dead and dying which creates, you guessed it, edge. The ground is now covered in blackberry brambles and other colonizers. Left alone, the edge out there would soon be impassible. This spring, I cut down blackberry stems as wide as my thumb and as tall as the top of my head. Already new suckers have shot up from the undisturbed roots.

This is life on the edge, baby. If I don’t figure out how to take advantage of this vibrant area, planting it with fruit trees and shrubs and berry bushes and ground covers, Mother Nature will continue to plant for me. A few blackberries might be a good thing. Yards of blackberry thicket? Not so much.

Last summer I inadvertently created another edge–this one behind my garden boxes. Cutting down the one big pine out front, clearing a spot for the boxes, putting a nice layer of mulch all around the veggie area, I left a nice strip of previously-shaded ground between the garden and the oak and maple saplings that guard the the older pine stands. To my delight, a miniature wildflower field grew up there this spring (a welcome change from those ubiquitous blackberries). Over there is a carpet of yellow flowers and over here a bunch of pretty, light-green grass.

I threw some chives into a bare spot last summer, and this summer waving purple heads of clover nod with the waving purple heads of those chives. Monarch butterflies flit and feed on both clover and chives, creating a pretty backdrop to my garden boxes. Wild blueberries have spread and flowered in the corner near the compost bin. Deeper in the shadows of the pines, delicate pink ladyslippers hang on sturdy, green stalks. 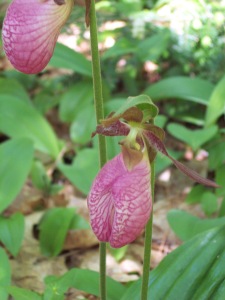 Buttercups are blooming on my lawn. The manual push-mower didn’t chop them as efficiently as the old gas-powered mower, and I kinda like seeing them nodding out there in the breeze.

Wild strawberries have taken over the rock wall that was shaded by that old pine in previous years. Were the seeds lying dormant there all these years? I’m waiting for the rosa rugosas to bloom among the tumbled rocks of the old fieldstone wall. 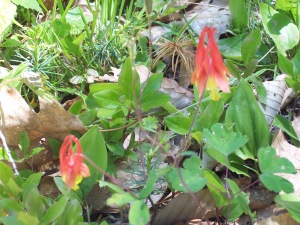 This red flower (a wild columbine, maybe?) popped up near the strawberries. Ground-covers surprised me with tiny pink or white blossoms. I’m ashamed that I don’t even know what these wildflowers are called. Perhaps a guidebook is in order. And a sketchpad.

I confess: I’m loving the edge. The trick will be preserving the best of the edge while using it to create a sustainable, functional, aesthetically-pleasing landscape around my home. In the meantime, the arugula in the garden box has provided me with an overabundance of salad greens and is now flowering and going to seed. Next year, I’ll plant the first row one week and the second row a week or so later so I can have a continuous supply instead of one big crop. The peas and kale are up and growing. I’ve planted tomatoes and brussels sprouts and peppers. A rogue red leaf lettuce and a rogue kale plant popped up in a garden box, and I’m just letting them do their thing.

Even the the “square” garden boxes have a wild side, I guess.

5 responses to “Where the Wild Things Are”