Day 14: Mojitos In The Square 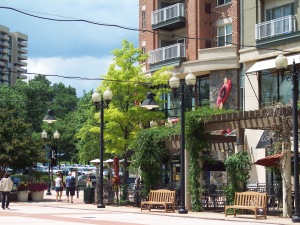 Day 14 was a typical day spent completely in my neighborhood. I woke around seven o’clock, brewed some coffee, and read more of Phyllis Theroux’s inspiring book while listening to the sounds of George Winston playing on Pandora.com.

After my coffee/music/reading hour I headed down to the gym to lift weights, something that I’ve been neglecting more than not over the past couple of weeks. The scale in the gym showed a one-pound weight-loss which is either good (all that walking is burning more calories than I thought) or bad (I’m losing muscle mass due to laziness and inactivity.) I choose to believe it is the walking but also vow to get down there three times a week for the remainder of the summer just in case.

After a shower, breakfast, and a blog post, I laced up my Sketchers and walked through Pentagon Row to the grocery store. I love strolling down the brick-paved sidewalks and looking in shop windows, passing people walking their dogs or pushing baby carriages or sitting at outdoor cafe tables enjoying a coffee or a meal. The mixed-use character of our neighborhood is comfortable and welcoming and convenient in ways that a typical suburban housing development is not. How did this human-scale neighborhood come about, anyway, I wondered.

When I looked up the history of the development of Pentagon Row, I discovered an article on the New Urban Network praising the thoughtful development of this neighborhood.

“Pentagon Row charts an exciting direction in urban retail and residential development — it embraces smart-growth initiatives to serve a community and captures the romantic spirit of living above the shop.”

The article goes on to outline the process of developing this 18-acre site which was originally zoned only for housing. By mixing housing with retail and community space–rather than separating them as developers in the 50’s, 60’s, and 70’s were wont to do–a walkable, neighborly, human-scale village was created in the middle of the metropolitan D.C. area.

This kind of development is also called Traditional Neighborhood Development. From an article by the National Association of Home Builders and posted on the Legacy Town Square (another planned neighborhood) website:

“Traditional Neighborhood Development (TND), also called Neotraditional Development or the New Urbanism, refers to a pattern of land planning and development that emulates the towns and suburbs built in the early to mid-20th century more than the automobile-dominated suburbs of the 1960s and beyond. While the typical suburbs and planned communities built since the 1960s have stressed a separation of uses and great emphasis on the automobile, traditional neighborhood development stresses a walkable scale, an integration of different housing types and commercial uses, and the building of true town centers with civic uses.”

When Hubby said we were going to be living in a ninth-floor apartment, I didn’t realize I was going to be living in the middle of a New Urban neighborhood, just the kind of place I’ve been reading and writing about the past few years. So now, when I talk about the wisdom of New Urban principals, I can do so with some authority. I’ve experienced it first hand–and I love it! 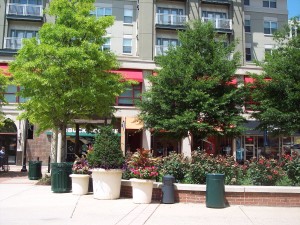 Shops on the Square

Hubby was home from work early when I arrived back home from my walk to the grocery store. Since the Teen had hurt her leg exercising the previous night and was busy learning how to use her new cell phone (yes, we finally figured out which phone/plan would be suitable), we went down to the gym to work out on the elliptical machines for an hour and then lazed around the outdoor pool and read through the worst heat of the day. The pool is surrounded by pretty black-iron fencing interwoven with bright-green vines, concrete planters overflowing with magenta impatiens, dark-leafed tropical foliage and spiky, green tropical plants, and lounge chairs and tables with dark-orange umbrellas. Moms and dads help their children learn to swim, teens and twenty-somethings tap away on their cell phones, women and men read and sun themselves. Here is something about the people who live in this apartment building–everybody reads. Whenever I come down to the pool almost every single adult and many of the teens have a book in hand. What does this say about the community? I’ll let you decide.

After our swim, Hubby and I strolled over to the square where the Thursday evening concert was underway. A two-person band mutilated some Steve Windwood and U2 songs from the stage in front of the water fountain, but their hearts were in the right place, and it was fun to sip a couple of blackberry Mojitos and eat Cobb salad at an outdoor table and watch the little kids running around on the grassy area in front of us while the band played. It looked like half the neighborhood decided to hang out in the square last night. We watched people of all sizes, shapes, colors, and dress wander past our table. There were the almost-furtive smokers standing outside restaurant doorways, dog-walkers, dads carrying their babies in slings, groups of girlfriends out for a drink or two after work, shoppers with bags stopping by for an ice-cream or coffee at Starbucks (I do wish there were a locally-owned coffee shop instead, but that is a small complaint) after a successful foray in the shops.

After all that exercise and stimulation (not to mention the two mojitos), I practically fell into bed and a deep sleep. These Thursday concerts remind me of when Hubby and I were first married, living in our apartment over J.J. Newberry’s in Farmington and going to the town park for the weekly band performances. Farmington is also one of those towns, like Alexandria, that the New Urbanists use as templates for their community designs. We did, in fact, live “above the shop.” We could walk to the grocery store, the movie theater, the pharmacy, the gift shop, and a nice variety of restaurants. When we bought our first house, that town, too, had a Maine street with housing and retail and schools all mixed together.

Why did we stray so far from what we knew? Why did the automobile change the entire structure of our housing developments? Having lived in both traditional neighborhoods and in a 1960’s cul-de-sac exurban housing development, I find it hard to believe anybody would deliberately chose to live cut off from the vibrancy and community that the “town,” with its retail business, civic spaces, and gathering spots, provides. What was the charm of suburban housing development with its little houses all in a row, serpentine roads that led nowhere, and nothing to do but sit in the back yard staring at . . . nothing but the fence between you and the neighbors’ back yard?

So the question remains: Can we remake these single-use sprawls into something truly liveable, walkable, and sustainable? It will take changing “by-laws” and renegotiating zoning to allow retail development, types of buildings (not only single-family homes but also apartments above retail shops, apartment-type buildings, etc.), sidewalks, and lamp posts. It can happen, but do enough people want to do it? Probably not, at least not now and probably not until it is too late.

Like Loading...
This entry was posted in Housing, New Urbanism, Outside the Box In D.C. and tagged blackberry Mojitos, New Urbanism. Bookmark the permalink.

One response to “Day 14: Mojitos In The Square”