I never promised you a rose garden, but here you go anyway!

Hubby, the Teen, and I went over to the National Mall area late Friday afternoon when Hubby finished work. The weather was perfect–sunny, warm, breezy, and dry–and everyone was out enjoying the gardens and sculptures and memorials. We passed the renovations going on at the Arts & Industries building and came across part of the Folger Rose Garden.

Some of the security guards from the museum were chatting and laughing near the garden. Tourists like us drifted along the sidewalk. People pushed baby strollers. Joggers, enjoying the dry air, trotted along the pathways beneath the trees along the Mall.

I had to snap a picture of the Smithsonian Castle against that bright, blue sky. The strong stone and linear lines were such a contrast to the soft flowers of the rose garden.

The one thorn on this rosy scene? A group of nasty, male tourists taunting a couple teenage girls. Here’s a hint: if you can’t be polite while traveling . . . stay home!

We hurried on toward the Washington Monument, ever present in the city, thrusting up into the sky like a giant arrow.

Arrow Toward the Sky

When I first walked around the National Mall, it simply seemed a tourist attraction with all the groups milling around, taking pictures of the monuments and buildings. The next time I went through it, I had the impression of a space more like a fair ground with all the tents set up for the Smithsonian Folklife Festival that took place around the Fourth of July weekend.

Softball Teams on the National Mall

Now, I think the National Mall is really, at heart, a big city park. Yes, there are lots of statues and monuments and whatnot, but it is also where softball teams get together and play (see photo above), groups of lithe athletes play Ultimate Frisbee , joggers run their regular favorite routes, families hang out on picnic blankets, couples share a bench and an ice-cream cone.

The Teen, Hubby, and I were still playing tourist, so we went looking for some more monuments and memorials in the early evening sunlight. 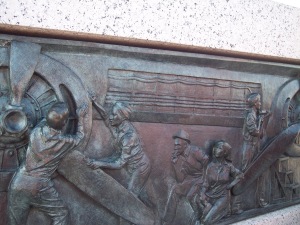 Women At Work In the Factory

We took our time at the World War II Memorial, a fantastic circular space with columns, pools, fountains, and some really gorgeous bas-relief friezes along the walkway leading down toward the main pool.

The WWII Memorial is dedicated to the men and women who fought and died in the war and those who supported the effort from home. The friezes show scenes indicative of these various areas of service.

I spent a bit of time looking at these bronze bas-reliefs, but there was so much more to see.

Each star on this wall represents one-hundred soldiers who died in the war. It is beautiful and sobering. 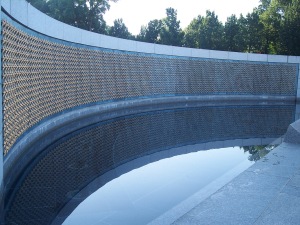 We continued on to the Vietnam Veterans Memorial Wall, Korean War Memorial, and the Lincoln Memorial. Seeing all the names on the Vietnam Memorial Wall brought on one of my mushy-moments. All those lives, all those families impacted by a war that is still so controversial. 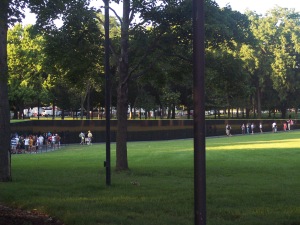 The Korean War Memorial stunned me with its larger-than-life statues of soldiers trudging through a space planted with junipers and lined with paving stones. I thought this was a fabulous design. The statues were so lifelike!

After so much walking, we were ready to head home. But not before we stopped to watch the ducks and geese at the pond.

And to watch the duck-like progression of a tour group on Segways.

I’m thinking I could use one of these little two-wheeled vehicles as all the walking is beginning to take its toll on my feet. As much as I love walking around the city–it really is the best way to see a new place–I may have to take a couple days off to lie around by the pool and let my strained tendons heal.

So, I have just one question: How DO these city girls run around town in five-inch heels?

Like Loading...
This entry was posted in Gardening, Outside the Box In D.C., Transportation, travel, Uncategorized, Wildlife and tagged D.C. Memorials, Segways. Bookmark the permalink.