They shall beat their swords into ploughshares, and their spears into pruning-hooks; nation shall not lift up sword against nation, neither shall they learn war any more. –From Isaiah II, King James Bible

This is exactly what the city of Alexandra, Virginia did with its old torpedo factory sitting on the Old Town waterfront. Built in 1918, just after the first World War, the U.S. Naval Torpedo Station produced Mark XIV and Mark III torpedoes until 1945 when WWII ended. The building was used as storage for Smithsonian artifacts, government documents, and military films and records until 1969. President of the Alexandria Art League, Marion Van Landingham, suggested the space be turned into art studios, and the Torpedo Factory Art Center was born.

The Torpedo Factory Art Center now has 82 artist studios with 165 juried artists creating, talking about, and selling their work. Visitors stroll along the space, peeking through the windows to watch the artists at work, stepping into the open studios to look at and purchase art or even chat with the painter, sculptor, printmaker, or fiber artist at work there. 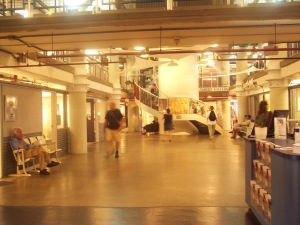 The Mom-‘Rent and I found our way to this amazing space on Sunday morning, the day we planned to spend shopping in Old Town Alexandria. I had heard about the Torpedo Factory, but it wasn’t until we’ve strolled down to the waterfront and over to a gazebo that I realized the large building behind us WAS the art center. Entering the bright red, painted doors, we were very impressed by the space, the bright studios, the concept of working artist studios being open to public view. There are gallery spaces here, as well as an art school where people of all ages and interests can take classes.

Some of the artists had placed “no photography” signs on their windows, so I decided not to take pictures of individual studios. However, the volunteer at the information desk said to go ahead and snap a photo of the general space. We saw everything from pretty, traditional watercolors to bright modern oil paintings to giant metal sculptures to belts and purses at a fiber artist’s studio. We gaped at large paper mache sculptures of animals. We ooohed over some delightful handmade prints. We talked to a couple artists and complimented them on their work.

I decided I HAD to bring the Teen back here as she is a budding artist, so we contented ourselves with the first floor and then headed back out to the shops on King St. and a few of the side-streets where we found some delightful little places.

We had begun our morning with a good, hot breakfast at the Bittersweet Cafe. This is a homey little place with a couple long, wooden farm tables, wooden counters with stools at the front windows, and tall cafe tables and chairs along the sides. The Sunday Brunch menu included scrambled eggs, a choice of omelets, breakfast burritos, and breakfast sandwiches ordered at the counter and brought to your table by a server. The coffee at the beverage bar was hot and delicious . . . and they had soy milk, always a plus in my book.

After breakfast and the Torpedo Factory Art Center, we veered off onto Union St. and found The Christmas Attic where we spent a good hour and a half browsing cards and gifts and collectables and ornaments, not just Christmas stuff but all kinds of lovely things. The space was charming with old floor boards and narrow staircases leading up to the second story.

I loved these little side streets. I snapped a picture of this bicycle shop on a narrow, little street near the waterfront off Union. A couple of the older streets are still paved in cobblestones, and the houses retain their historic charm and beauty with painted doors and shutters and crooked windows looking out onto the street. 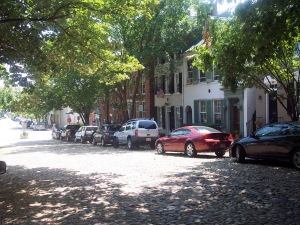 There were disturbing posters and an information board calling for community action to prevent a large Old Town waterfront development. I hope the citizens of Alexandria will decide to fight to preserve the historic character of that part of town. As lovely and comfortable as highrise apartment buildings and hotels may be, some things are best left as they are . . .

Leaving Union, we headed back up King and stopped into Decorium Gift and Home, a quirky and elegant and whimsical (with just a touch of frou-frou) home decor shop that meets every grown-up girl’s fantasy with its gorgeous upholstered furniture, painted armoirs, framed prints, glittery costume jewelry, children’s room furnishings, sparkly chandeliers, and much more. 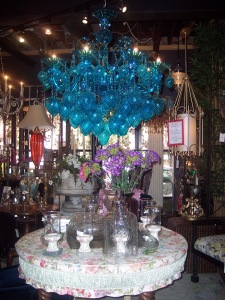 The saleslady was gracious enough to let me snap a quick picture, saying, “Just pretend you are buying something.” Was that a gentle jab? Probably, but that’s okay. I thought about picking up a sweet, fabric-covered journal, but with all this online blogging, I just haven’t been hand-writing enough to justify the purchase. I may have to go back for the chunky, glittery ring with the fake stones or the precious green-print fabric slippers before the end of my stay, however. If I lived in Alexandria and had the cash, I’d take advantage of their interior design company, d2.

Maybe someday I’ll write a bestselling book and be able to afford to patronize beautiful, locally-owned shops like this one. Until then, I’ll look and report and buy a little something now and then. It’s the best I can do for now.

The Dad-‘Rent and Hubby decided to forgo the Metro and instead hopped on the bikes to zip down to meet us. After buying bottled water from a street vendor, we decided to take a walking tour of some of the history Old Town Buildings, starting with the Alexandria Visitor’s Center situated in the Ramsay House, Alexandria’s oldest house built by William Ramsay, a friend of George Washington. 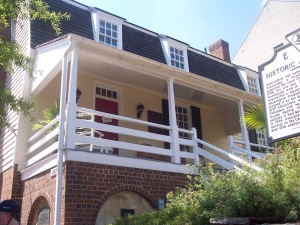 Next, we headed over to Fairfax to the Carlyle House, built by Scottish merchant, John Carlyle, for his bride. The Carlyle House has a pretty park and holds outdoor concerts and events open to the public. Might have to check that out before the end of our stay.

We were anxious to find the Yeaton-Fairfax House on Cameron St. because my mother’s maiden name is Yeaton. We were told we were lucky to have the 2010 Alexandria Visitor’s Guide because this house is no longer included on the walking tour. The house is privately owned, and the inhabitants were fed up with tourists knocking on the door and asking, “Can we just take a peek around the house a little bit?” 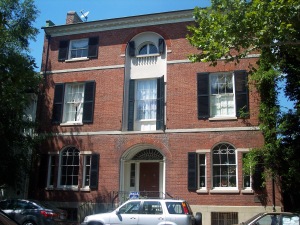 I guess the owners must have really been discouraged, because when we found the house, a For Sale sign was posted at the front entrance. 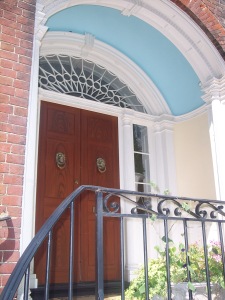 There appeared to be a wonderful, shady, and extensive garden attached to the home. The house was built by a Scottish merchant William Yeaton in 1799. Yeaton also designed and erected the Washington family tomb at Mt. Vernon. Later, Thomas, the Ninth Lord Fairfax, bought and lived in the home.

We moved on to a wonderful talk by a charming volunteer docent at Christ Church where George Washington and his family and servants attended services. We sat in the Washington pew where U.S. Presidents and heads-of-state such as Churchill have sat. So much history everywhere in this city! 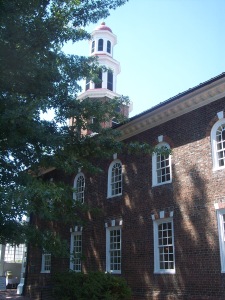 After the walking tour, we revived ourselves with a frozen custard (I had a blueberry acai frozen fat-free yogurt), Mom-‘Rent and I visited a couple more shops, and then we took the Metro home while the guys headed back along the bike trail. Once again, Old Town was a delightful and charming place to spend a Sunday.

Like Loading...
This entry was posted in Art, Outside the Box In D.C., Restaurants, Shopping and tagged cafe, cobblestones, Shopping, Torpedo Factory Art Center, Yeaton-Fairfax House. Bookmark the permalink.