Turkey in the Straw-Bale 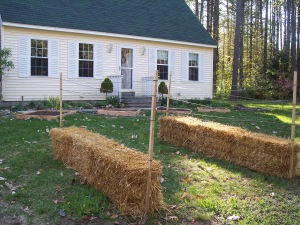 Since I live in an HOA (homeowner’s association) that does not allow “livestock,” you may have already guessed that the only turkey in my straw bale garden is me.

In the future, anyone who is interested in self-sufficiency, sustainable living, growing/raising of backyard food will avoid these HOA’s like a nuclear testing field. Not that HOA’s aren’t pleasant places to live. And not that they couldn’t be designed ON PURPOSE to support sustainability and community and nice things like backyard poultry that loves to eat up nasty ticks while providing delicious, nutritious eggs with deep-gold yokes. The tragedy of my particular HOA is the squandering of so much potential for self-sufficiency, learning, discovery, and…extremely tasty eggs!

The other problem I’ve discovered is the lack of sunlight due to so many tall, skinny, 100-yr-old pine trees that have sprung up from the old, deserted pastures of a time not so long ago when we were agrarian and proud of it. Don’t talk to me about “old-growth forest.” (See the stand of pines in the background of the photo above).

Old-growth forest does not have fieldstone walls running through it, people! This is old farm land. Pasture. Probably dairy cows. Whether we like to admit it or not, our HOA is built on livestock droppings now covered over with the pines and with the hardwood saplings struggling and finding bright pockets of sunlight in which to stretch now that the pine forest is beginning to break down. 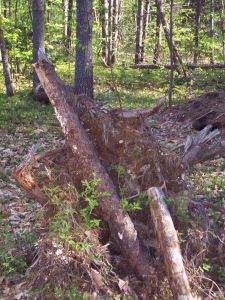 This is the stump from a pine that fell (tipped) not 30 ft from our house. The pine forest is crumbling around us, but not quickly enough to give me adequate sunlight for a full-scale kitchen garden. The only spot with enough sunlight for things like tomatoes and peppers and other sun-loving plants is directly over the septic field–where I’m not convinced I should create a conventional garden.

Now that nine years have gone by, my house is just starting to feel settled-into. The area directly in front, past the beech trees and the remnant of stone wall is the leach field. Here, I get six to seven hours of sunlight, but I was at a loss as to how to plant on it. One day, while bopping around the cyber world of Facebook, I saw on a friend’s wall the answer to my problem: straw bale gardening.

At least I think the bales will be the answer. The Facebook page led me to a website called Introduction to Straw Bale Gardening. I ordered the pdf version of Joel Karsten’s book/let. This weekend I moseyed on down to the farm supply store for straw bales and 24-0-0 fertilizer and then over to Plummer’s Hardware for stakes and string. In a couple of hours, my garden rows were ready for “conditioning.”

The process is pretty simple. Take some straw, sprinkle on some nitrogen, soak it with water, repeat, and wait for the composting to break down the straw into a growing medium. The stakes hold the ends of the rows tight while the string (or wire) between the stakes provides a trellis for growing plants.

An unidentified flowering shrub in my back yard

Once I set these up, I observed the sunlight beaming down on these bales from 8 a.m. until almost 4 p.m. yesterday. My hope for a bumper crop of tomatoes is almost as bright as that Flower Moon the other night.

The beauty of straw bale gardening is the ability to place a garden on any surface–not unlike container gardening. Theoretically, it is cheaper as containers can be expensive. However, I will warn you that this may be a bit of a marketing ploy. Containers will last for years, while a straw bale will only be good for a year, two at most. Of course, the spent straw, now composted quite a bit, will then be perfect for creating “lasagna gardens” or for use as nutritious mulch on other garden beds. Also, the bales I bought were expensive–$5.99 each! The 50lb. bag of fertilizer was $30.00, but it should last me a good while. I’ve since discovered that the fertilizer was probably not necessary. I could have put on a layer of the $30/TRUCKLOAD of Tibbett’s compost and maybe started the process a bit earlier.

Delilah by the Woodpile

There are also organic fertilizers that could be used. Bloodmeal. Urine.

Yes, you read that right. Urine is full of nitrogen and is completely sterile. I haven’t quite become that brave yet–not brave enough or obsessed enough about sustainability to pee in a bottle for feeding the perennials, let alone the tomatoes. But there is something poetic, I think, about completing the cycle in the same way that using composted cow manure completes the cycle.

So, my little front-yard experimental garden is almost ready for planting. I have the four old boxes for greens. I have the five new boxes for peas and string beans and squashes and carrots and herbs. I have the two rows of straw bales for tomatoes and peppers and maybe some greens or something in between. My perennial beds have been divided now. I’ll be putting some more herbs in the sunny perennial bed to go along with the rudbeckia and echinacea and the lilac shrub and chives.

Next year I may create a big perennial flower bed on part of that leach field–the kinds of flowers for bouquets and for dying homespun skeins of yarn, perhaps. And I still want to create an apple tree guild between the beeches and the compost bins.

4 responses to “Turkey in the Straw-Bale”