Last night we took in a ballgame at Nationals Park where we cheered for the home team as they played against the Florida Marlins.

My parents (a.k.a. The ‘Rents) flew in from Portland yesterday afternoon, and since the temperature outside had finally dipped and drier air was finally cooling our sweaty brows, we figured a night out at the ballgame would be the perfect start to their D.C. vacation.

Hubby bought me and the Teen hats for $5 from one of the many vendors selling gear and tickets on the walkway between the Navy Yard Metro stop and the official ticket booth. The ‘Rents were happy to see another BoSox fan standing in line for a ticket. (This year’s Boston-Hat-Du-Jour is brown. What’s up with that?) 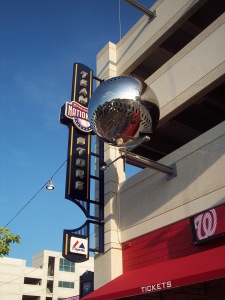 I was glad for my bright red Nationals cap when we got to our $10 nosebleed seats high above the right field line. The setting sun blazed into our faces, but a nice breeze was blowing off the Potomac behind us so we weren’t too sweltery.

We saw a couple of home run hits–two for the Marlins (unfortunately) and one for the Nationals in the fifth inning which raised hopes for a comeback.

The franchise knows how to put on a good show, encouraging fans to dance or jump around or wave hats. Of course everyone stood up during the Seventh Inning Stretch and sang a rousing version of “Take Me Out to The Ballgame” where we “root, root, root for the Nationals…”

As for food, the Teen enjoyed a “dawg” and a soda and spent most of the time texting with friends back home. At least she wasn’t in front of the computer or watching television teen dramas on cable. Hubby had a few beers with his friend from work. Later, we saw some cool outdoor seating areas with comfy couches, tables, and big-screen tv’s showing the game. I thought, “If I lived here, it would be fun to head over to the ballpark after work on a weeknight, meet up with friends, have some snacks and drinks, and watch the game.”

View of the Potomac behind the Stadium

Another highlight was the “Presidents Race.” The Nationals have a few mascots–an eagle, George Washington, Thomas Jefferson, and Teddy Roosevelt. The Presidents raced around the outfield, and it looked like Teddy was gonna win. But George tackled him from behind, falling down himself, leaving good ol’ Tom to win the race.

Click HERE to see a video of the mascots.

The home team ended up losing 11-2, but it was a fun night out. The sun went down, the air cooled still more, and everyone just seemed to relax and enjoy being outside enjoying America’s pastime. The sunset was brilliant! 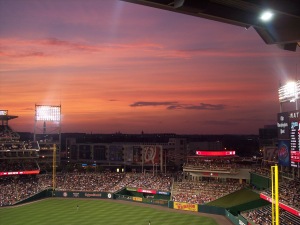 Sunset Over The Stadium

Posted in Baseball, Entertainment, Outside the Box In D.C., travel