Day 31: Chillaxing At the Kogod Courtyard 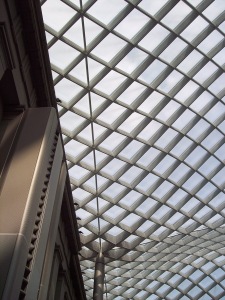 Canopy over the Kogod Courtyard

With temperatures reaching 100F and humidity that made it feel more like 115F, what better way to escape the heat than take the yellow line downtown to the Kogod Courtyard for some funky jazz, board games, coffee and biscotti, and prime people-watching?

The Robert and Arlene Kogard Courtyard is a 28,000 square foot space canopied by a multi-paned atrium ceiling floating above the gorgeous Greek Revival building that houses the National Portrait Gallery and the American Art Museum. Built in 1836 as the U.S. Patent Office, the building is one of Washington D.C.’s oldest. The Teen and I escaped our apartment and the oppressive heat to wander around the museum corridors, soaking in the art (me) and texting (the Teen), and trying not to get on each other’s last nerve (a challenge).

So did this Edward Hopper. Later, I noticed similarities between the two paintings. The girl’s posture in the window is like the man’s posture in the canoe. The trees are like mountains. The field, like the river.

I was intrigued by the use of graph-type lines and grids on this modern painting. Math art. The Teen wasn’t impressed.

We took a turn through the folk art exhibit, an impressive collection of primitive paintings, whirligigs, log carvings, bottlecap art, and an amazing installation of one man’s aluminum foil representation of heaven. James Hampton secretly filled his garage with this piece created between 1950 and 1964.

We then scooted over to the first floor of the Portrait Gallery where we saw paintings ranging from an Abraham Lincoln miniature to a large painting of Bill and Melinda Gates. 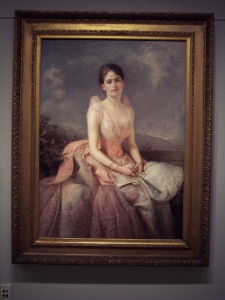 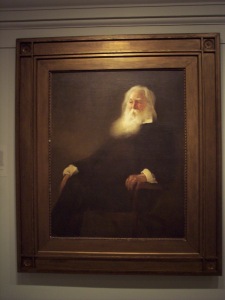 The Teen thought Walt Whitman was a dead ringer for Dumbledore. LEAVES OF GRASS meets HARRY POTTER AND THE DEATHLY HALLOWS. 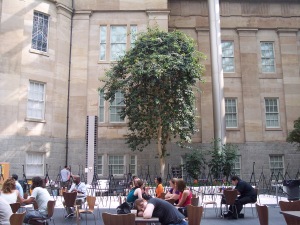 Light and Cool in the Courtyard

We strolled out to the courtyard where the jazz band, Funk Ark, was setting up for their five o-clock performance, part of the museum’s Take 5! summer series.

I love this concept! The museum makes board games available, offers wine and coffee and food from the Courtyard Cafe, introduces awesome bands like Funk Ark, and everyone just hangs out . . . chillaxing.

"Oh, what move is she making now?" 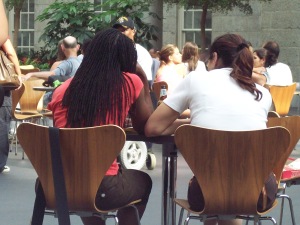 ArtJamz was there with canvas, paints, and enthusiasm. Participants sign up ahead of time and get a chance to mingle and create while listening to the band. If you live in D.C., check out their website. Sounds like a great alternative to the more usual night-out options.

I settled for a cup of coffee, my notebook, and pen.

We hung out listening to the funk jazz for about an hour before diving back into the sea of humidity outside.

We hopped on the train at the Gallery Place/Chinatown Metro stop. Hmmm, Chinatown. It will just have to wait for another day . . . Outside the Box in D.C.