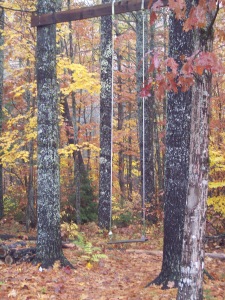 Cathedral of the Forest

You know the old saying, “Can’t see the forest for the trees?” This is how I feel about this year’s elections and ballot initiatives. Take, for instance, Question 1. Mainers will decide if we want to allow a casino to be built in Oxford County, arguably a part of the state that could use a boost in jobs and income and opportunity–the trees. But what about the forest? According to the Morning Sentinel Online, proponents of the casino have outspent opponents 10-1. Who ponied up the money? Mostly the casino’s partners and investors.

Then again, who is contributing to the Vote No campaign? Oh, businesses like Hollywood Slots in Bangor (they have quite the little monopoly on gambling in our state at the moment) and the Passamaquoddy Indian Tribe up in Washington County (they are hoping to get a casino initiative of their own on the next ballot). We are supposed to believe that these groups have our best interests at heart . . . nothing to do with competition for what little Maine dollars there are to be spent on entertainment when the cost of heating oil is going up and January’s chill is lurking around the corner of the calendar.

While I am strongly in favor of business development in Maine, and I also believe in free enterprise and competition, I’d rather see something on the ballet like: Will you support the RE-creation of shoe factories, textile mills, and paper mills in the State of Maine? I’d vote yes. Will you support tax-exemption for Maine’s small, non-industrial farms so as to encourage more local production of food? Yes. How about abolishing sales taxes on ALL Maine-produced goods? Instead of sneaking down to sales-tax-free New Hampshire, maybe a few more Mainers will stay home and buy our own great products.

Do we need a casino . . . or just a better view of the big-forest picture? And some Outside the Box thinking?

What about the gubernatorial candidates? Any of them thinking up new and improved ways to grow our sluggish state economy? One candidate has been in Augusta so long that the “way things are” attitude has probably become embedded. Another candidate has some radical, new ideas that would certainly shake things up a bit, perhaps for the better, perhaps not. The third candidate presents some solid, maybe even workable solutions for what ails us, though less radical and therefore less likely to produce sweeping changes.

Whoever takes over the Blaine House after today’s election, the new governor will have a tough row to hoe. It’s one thing to come up with ideas. It’s another one altogether to initiate legislation and get the measures passed at the State House. And we can’t forget (though sometimes it is easy to) that we are part of the larger national economy. Some of what goes on in Washington effects us here in Maine, no matter what crazy or just-crazy-enough-to-work ideas we come up with here in the Pine Tree State.

Remember to vote today! Take a look outside at our still-pretty foliage. At least the view from our windows is still tax-free. For now.

4 responses to “Election Day In Maine”